The journalist of Russian propaganda mouthpiece ‘Lifenews’ Semen Pegov has written a book ‘Me and red separ’ in the honor of ‘DPR’ fighter Arsen ‘Motorola’ Pavlov. The presentation was in occupied by pro-Russian forces Donetsk. Separatist internet-editions have written about it.

A book about ‘Motorola’ has 255 pages (circulation of 3 000 copies) and 4 charters: ‘How Slavyansk was leaving’, ‘Children of Caliphate’, ‘Poems’ and ‘Motorola’. Last section has stories about acquaintance of Pegov with Pavlov. Also book has stories about battles in Slavyansk and Donetsk International Airport. 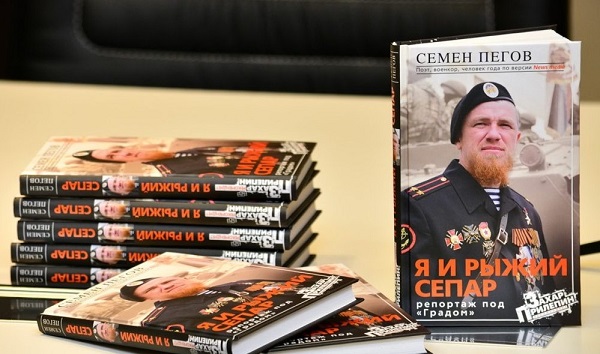 ‘I thought that it’s necessary to pull myself together and, unfortunately, that story which happened with Arsen, become the occasion, unfortunately tragic, to write the story about his fight path, although not all, but to do even then, where it began’, the author of the book expressed his feelings.

Pegov told how he posted photo with the inscription ‘Me and my red separ’. ‘It seemed to me that it’s the funny and lively moment, that’s why book got such a name’, Russian propagandist told about the idea of the name of a book.