Informator.media is continuing to publish diary of Luhansk dweller, stayed in native city and tasted all the charms of ‘Russian world’…

The atmosphere in Lugansk is very tense: People are permanently frightened by military situation, or the onslaught of Ukrainians or ‘Ukrainian saboteurs”, or ‘if Ukraine returns, all of us will be killed’… As the odious German propagandist Goebbels said: ‘The more monstrous the lie, the easier it is to believe in it’… But it doesn’t work for those, who permanently go in controlled Ukraine or communicate with friends and relatives, living on a ‘Big Land’. They can adequately assess the situation. Sometimes the squabbles, like ‘Ukrainians will cut all of us’ – ‘So, why do you go to those Ukrainians, do you want them to cut your throat?’ sound in queues to the bus, going to the checkpoint near broken bridge through Seversky Donets river, that directs to Stanitsa Luhanska.

Ukrainian-hatred propaganda of Russian TV, translated in every Luhansk flat, brings people to a terrible condition. One part believes in everything that is spoken in the TV-box, other can’t see all this rubbish, but watch it to know news, third doesn’t turn on the TV, they’re looking for the news in internet.

I can say one thing: during 2 and half a year of the occupation and absence of an alternative media, a lot of Luhansk dwellers understood, that neither Russia, nor Ukraine don’t need them… They see from which side come heavy machinery, how talk and behave ‘visitors’ in camouflage uniform… But at the same time they hear from the TV Putin’s reasoning that Donetsk and Luhansk are Ukraine… Wherein they hold in their hands Russian money, not Ukrainian… Therefore they have neither Russian, but Ukrainian passports…

There is never a lot of money. Especially this is about those, who get scanty pension or wage. ‘People’s republic’ has capitalistic price on food, medicine and household chemicals. This is higly in demand, because there is no longer any funds on clothes and other luxury.

Entering Ukraine, people compare prices there with prices in ‘young republic’ and draw the conclusion: there is more cheaper in Ukraine… Somebody says, that utility price is more on a ‘Big Land’. But there are no subsidies in ‘LPR’! That’s why pensioner, getting help in size from 1896 (~$31) to 2200 rubles (~$36), gives for utility services up to a half of this amount. Funds, left after such payment, are enough to buy water and a bread.

There is a work in ‘People’s militia’ in Luhansk, which is ‘republic army’ in fact. There is also a work almost in all administrative facilities. But less of people go there for job. But, if somebody go, it’s only to feed owns family. It’s because there are big salaries – from 7500 rubles (~$123). Salaries are somewhat lower, and sometimes they are delayed in the budget institutions like medical and educational facilities and utility. People, working at ex-state mines, get not full wage of 20% of hall amount. Sometimes miners get humanitarian rations. Big number of them fails from such a work. They’re going to earn in Russia or in Ukraine.

The employment Service offers to unemployees to get fixed up in builders or auxiliary workers, improvement workers, seamstresses job…

Generally, some locals are joking ‘we got wage 4000 UAH (~$147) before a war and we have the same amount, but in rubles (~$65)’. A lot of them sadly state: ‘How we can survive on this money, when prices in shops and markets are equal to Moscow’s? But biggest part of Luhansk dwellers, basically of young age, don’t work and live on wages, got by their parents-pensioners or on funds that they managed to save in pre-war years, or on funds got from the sale of owns clothes and household goods. 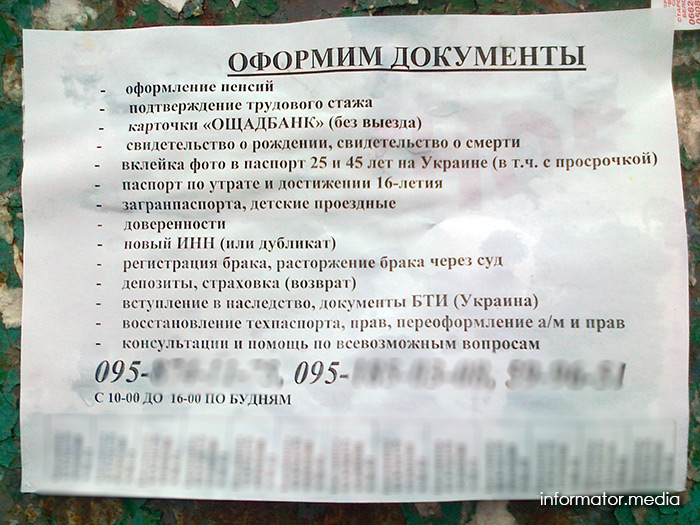 Pensioners move to free Ukraine territory to recover there pension getting. If they can – they go by themselves. When some of them can’t move themselves, relatives help to them. Sometimes I see how young or people of middle age move through the block-posts with old women, sitting in wheelchairs of even lying on medical stretchers. Pension tourism, of course, illegal, but how people, got in trouble, must survive? Ukraine wasn’t ready for war and help to refugees from flaming Donbass. But it was possible during two years to create transparent program of assistance to the elderly, who leave dangerous for life territory and demand permanent attention to themselves.

It hasn’t been done and aged people were left in their houses under the threat of death in case of shelling, or death from malnutrition, or lack of normal medicines. Somebody says that they don’t have a right on pension, because they live on occupied territory. Are they not citizens of Ukraine? Or have they worked 25 years of their lives on some foreign state? Those, who got for some reasons ‘LPR’ passport can’t get Ukrainian pensions too. At that times more young and strong Luhansk pensioners move to get transfers and parcels from Ukrainian relatives to closer and more calm Stanitsa Luhanska.

There are no bank system and normal post connection in ‘LPR’, although there is financial center alike ‘First Commercial’ or ‘Soyuz’ (Union). But it’s really not a bank, but rather a transit-money office, similar to a conversion center. The scheme of getting money through such a centers is very difficult to understand for an ordinary philistine. First money is credited to the card account of the head of the branch of such a center, and only after 24 hours a person can receive them after deducting a commission of 5-10 percent, depends on currency and amount of transfer. So, Luhansk was folded as much as 50 years ago in its financial circumstance. There are no banks, no non-cash accounts, no ATMs. Cash rules in ‘republic’ and what is more it’s Russian rubles. Last days ruble exchange rate to hryvna was set on the level 2.15 – 2.30 rubles for 1 hryvna.

Be healthy, do not cough …

Medicine in Lugansk is limping on both legs. ‘Republic authority’ does loud statements that humanitarian aid for medical facilities is permanently come from Russia: new equipment, drugs etc. I can’t say something about new equipment, because I haven’t seen it by myself and don’t want to spread rumors.

What depends drugs: some part comes to hospitals, but ill people anyway must buy to themselves expensive medicaments, which are not ‘humanitarian’. Doctors recommend to buy Ukrainian cures, but it’s hard to find them in Luhansk. Then people apply for help relatives and friends, living in a free country and ask them to to transfer the medicines on the list as soon as possible of move by themselves for medicine in neighbor Stanitsa Luhanska.

Self-taught and former nurses have taken places of professional doctors in hospitals. Specialists, stayed in Luhansk, could be counted by fingers. Sometimes tragedies are happen in hospitals. Sick ARVI or even a flu the doctor comes to a seriously ill without a medical mask and answers on the disturbance: ‘Nothing won’t help you yet’… You know why doctors come to work sick? Because nobody pays for their sick leave and salary depends on waste days or hours.

Not only doctors have no payments for sick-lists. There is no such a way of help in the ‘republic’.

Editorial office of Informator.media has no influence on blogs content and doesn’t responsible for the opinion, expressed by authors