Military registration and enlistment office in Crimea demanded from the recruit Jehovah’s Witness to provide a document of conversion. Website ‘Grani.ru’ reports.

The edition reports that on June 9, 2017 The conscription commission of the military registration and enlistment office of the Bakhchsarai district offered the recruit to undergo alternative civilian service. He agreed, noting that he had been trying to achieve this for a long time.

But then conscript was declared that he will get a right to undergo alternative civilian service only if he switches to another religion.

There was a demand in two agendas to come to rectal ‘to provide documents about faith switch’. The believer was not told exactly which faith he should cross, and where to get such documents. At the same time he was warned that in case of refusal a criminal case will be opened, the newspaper notes. 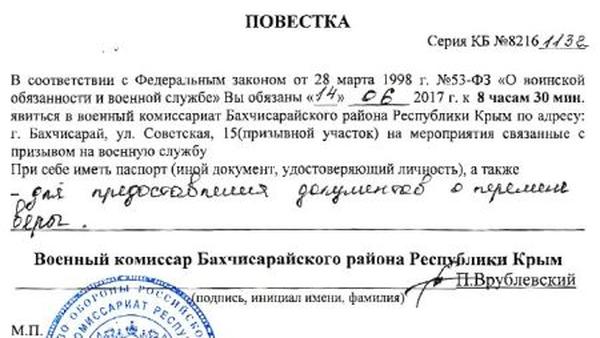